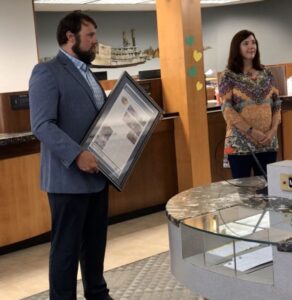 “The community cornerstone award was designed to recognize those companies for their longevity and continued community support,” Sokolovich said. “So when we were deciding who was going to win this award for 2020, you came to the top of mind.”

CRDC President Erin Cole said it’s remarkable that Clinton has institutions in the community for over 150 years. The longevity and stability of businesses in the area make Clinton an attractive place to live, she said.

Clinton Regional Development Corporation Board of Directors Chairman Stephen Clements noted that there were about 24,000 banks in the mid-1960s. He said there are now 5,100 left due to mergers and failures.

“So to have Clinton have a bank that’s been around that entire time is substantial,” Clements said.